The patron of Lee Woo Sing College relates his early years in Shanghai and Hong Kong, and the principles and virtues that he has lived by.

Dr. Lee Woo-sing (centre), patron of Lee Woo Sing College at CUHK, is a senior figure in the financial sector known for his acumen in investment. Amiably called 'Uncle Woo-sing' by all, his serenity and happiness are infectious.

'It's very simple to be happy. Troubles come from family, school or society every day. It's important not to take too much to heart. It takes me five minutes at most to let go.' The last is his pet saying.

A native of Ningbo, Zhejiang province, Dr. Lee has not always had plain sailing. In 1950 when he was 23, he came to Hong Kong with a small sum of money. The gold market was so vibrant then and there was a shortage of traders. Although he barely spoke Cantonese, he soon became a floor trader. 'There was subtle discrimination against northerners like me. My telephone was always placed in the far corner. At that time we had to shout and gesticulate like mad to bid. To distinguish myself, I stuffed my soles. I invented the high-heels in the 50s!' He said that making friends was not easy. It takes time and sincerity to foster relationships.

Integrity and harmony are the two principles that Uncle Woo-sing has lived by. They are in the motto of Lee Woo Sing College: 'Wisdom, Humanity, Integrity, Harmony'. He said with pride, 'I haven't done anything to compromise my integrity all through my life.' When doing business, he chooses integrity above profit without hesitation. 'You have to accept it even though you stand to lose. You shouldn't fuss over your personal gains.'

He meant what he said. In the October 1987 market crash, his company went into financial crisis. His partners wanted to wind up the company, but he sold all his stocks and even mortgaged his family property to pay off the company debts. 'I took it upon myself. If it worked out, the company was saved. If it didn't, it's on me,' said he nonchalantly. But we know this is easier said than done.

Self-made but Committed to Education

Uncle Woo-sing was born to a middle-class family, which ran a shipping business in Suzhou and Hangzhou. But the family fortune waned after the outbreak of war. He had to drop out of school and started working as an apprentice at a bank in Shanghai at the age of 14. But education has always been in his mind and he sees supporting education as the best way to give back to society. 'Whenever I had some spare money, I'd donate it to support education.' It is widely known that the founder of Lee Woo Sing College is his brother Dr. Li Wo-hing. The Li Foundation (Bing Hua Tang) made a generous donation of HK$150 million to CUHK in 2007 to establish the College, which was named after his older brother to show Dr. Li Wo-hing's admiration and respect.

Ms. Li Tak-tai Leada (left), a member of the College's Committee of Overseers, is a niece of Dr. Lee Woo-sing. She was raised in a family which treats traditional Chinese virtues seriously: respect the old, love the young, work hard and do good. 'My father is 20 years younger than my uncle and so respects him like a son does his father. My uncle has been taking care of every member of the family. He was the first one to come to Hong Kong. It was never easy struggling alone for a living, but even in his most difficult times his family in Shanghai was never far from his heart. He eventually helped them come to Hong Kong.'

Ms. Li is the director of a listed company, but she spares her time to serve the educational initiatives supported by her family. She interpreted the notion of harmony advocated by Lee Woo Sing College this way: 'Innovation and skepticism are necessary for development and advancement. Harmony does not mean silent conformity. It means respecting others' views while voicing one's own.' The many lectures, high-tables and sharing sessions at the College all aim at instilling in the students some civic sense and skills.

Miss Victoria Katie Lee (right), or Vicky as we call her, is Uncle Woo-sing's granddaughter. She wears a broad smile typical of the Lees. She did not go abroad after graduating from an international high school. 'I have grown up with my grandparents to be very close to them. I think staying around them is the right thing to do, whereas studying here or overseas doesn't make much of a difference.' Her aunt Leada believes she must have at one point thought about studying overseas but had given her priority to family. 'That is our family value,' she said.

So Vicky entered CUHK's School of Business. She graduated last December and now works at a medical equipment company. Supporting her family's initiative and identifying with the College's philosophy, she joined Lee Woo Sing College as a non-residential member, and made friends with many open-minded and easygoing students there. She hopes to see the College organize more activities to enhance teacher-student interactions as well as the integration of international and local students.

Hearing his granddaughter talk about her college life, Uncle Woo-sing feigned displeasure that she had done little to plant the seed of 'harmony' among her friends at College. Vicky gently explained, 'Young people tend to think and learn about the world in their own ways. Something will become acceptable only when a certain stage is reached or with experience gained.'

Having spent most of his life in Hong Kong, Uncle Woo-sing feels deeply for the territory. He likes to see everyone work in harmony for a better collective future. Talking about how sad he felt about the harmony in society being disrupted, tears swelled in his eyes. But the uncle to everyone regained composure in no time. 'It's OK. I'll be happy again in five minutes, when it's time for lunch.'

This article was originally published in No. 464, Newsletter in Oct 2015. 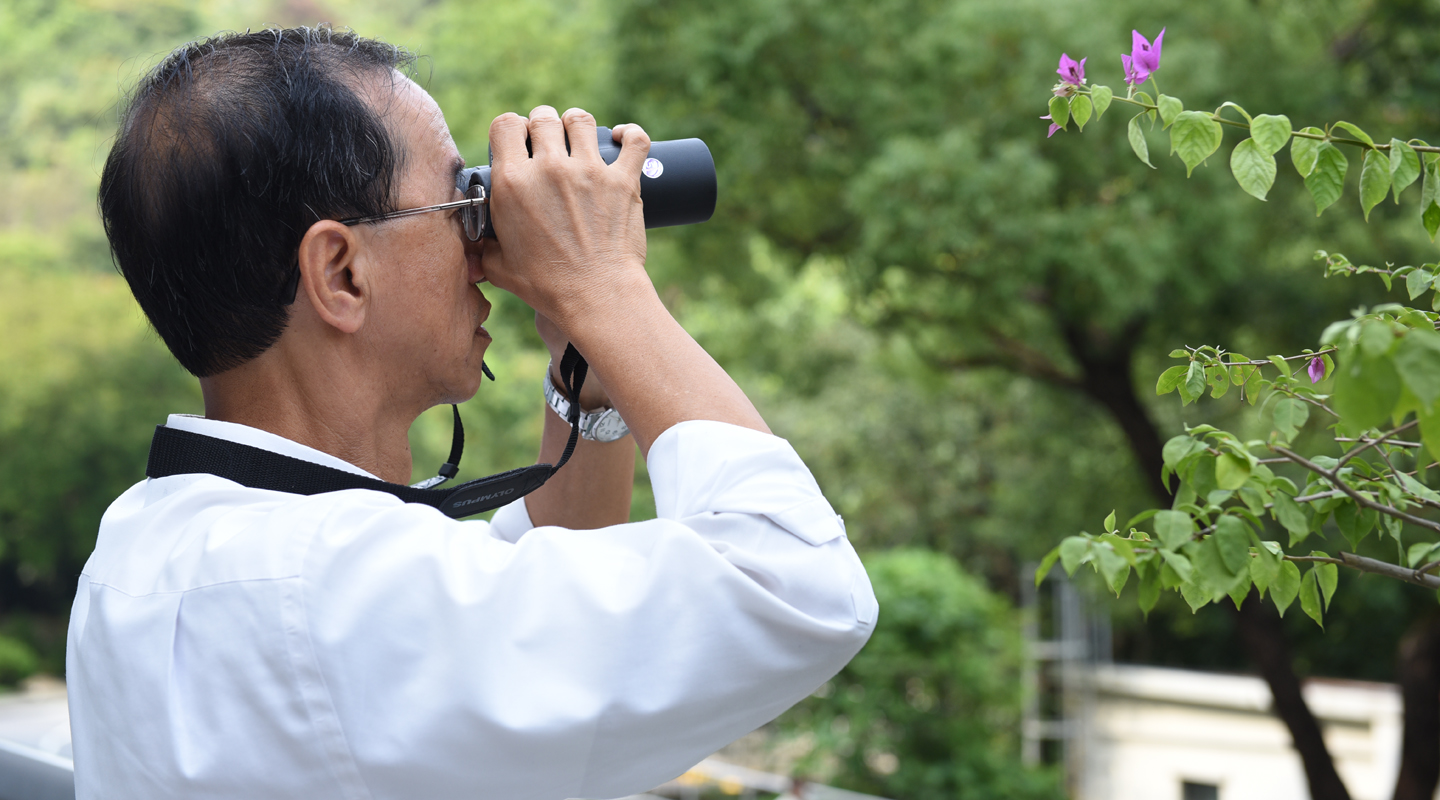 Words from a Seasoned Bird-watcher

Prof. Lam Chiu-ying shares the best spots and time for bird-watching on campus, and how the hobby may heal one's mind and soul.

Kinson Chan, a quantitative finance student who takes a near-professional interest in the ancient art of Kunqu, took advantage of the Kunqu training offered by Lee Woo Sing College and opted for the leading actress role.

How Bankee Kwan grows in wisdom through storms and crises