Our Eminent Scientists @ CUHK:
Embarking on a New Journey: Science with and for Society

Embarking on a New Journey: Science with and for Society
The coronavirus pandemic has posed extraordinary challenges in almost every part of the world; it has spread with alarming speed, uprooting our lives and bringing economic activity and the aviation and manufacturing industries to a near-standstill. We become aware of the energy sources and the pollution that they cause after learning about the short-term dip in global energy demand and an abrupt decrease in global carbon dioxide (CO2) emission due to the COVID-19. For years before the pandemic, scientists have been searching for clean energy sources, in particular improving the hydrocarbon fuel processing to eliminate pollutants emission, and Professor SONG Chunshan, Wei Lun Professor of Chemistry is one of them who devotes himself to the research of catalysis, and chemistry of energy and fuels.

SONG has authored or co-authored over 300 papers in refereed journals and 15 edited books, and is an inventor of 8 patents. His original and innovative research contributions to catalysis, adsorption, CO2 capture and conversion, and energy and clean fuels research have been widely recognised by many awards and honours. In July 2020, he has moved from the US, a place which he had worked and lived for over 30 years, to Hong Kong to join the CUHK Science Faculty as Dean of Science. The new Dean is eager to continue carrying on the Faculty’s mission of educating and inspiring the next generation of scientists by advancing its teaching and research to a higher level, and to serve society through science. 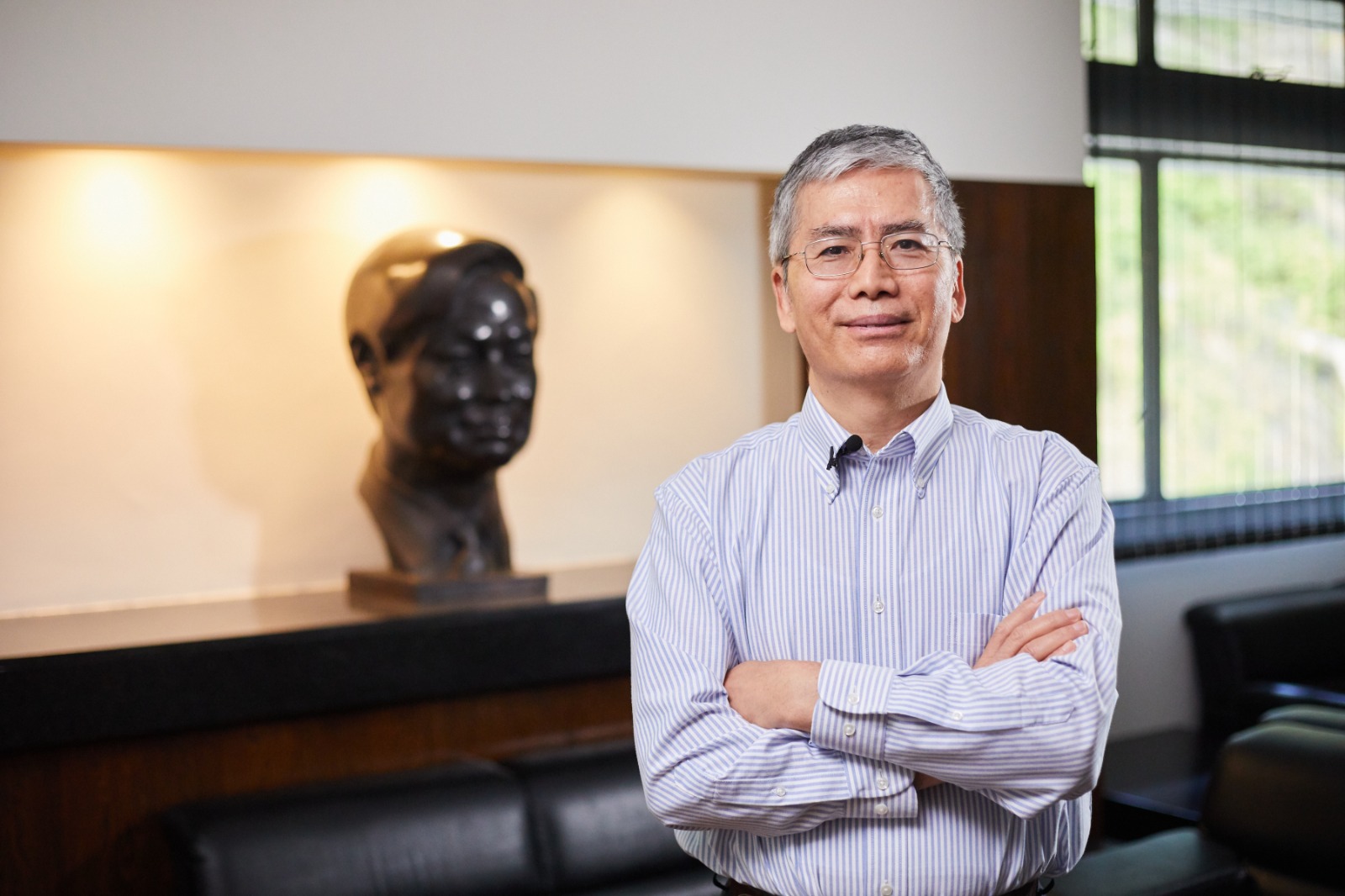 Professor SONG Chunshan has joined CUHK as Dean of Science in July 2020.

Taking from Nature and Using for the Benefit of Nature
Fossil fuels is a general term for buried combustible geologic deposits of organic materials, formed from decayed plants and animals that have been converted to fuels by the forces of geothermal heat and pressure in the earth’s crust over hundreds of millions of years. Fossil fuel processing technology has eased the burden of fuel exploration and extraction, but many of these valuable natural resources have not been utilised in more environmentally friendly manner. Scientists have long been working on advancing catalytic processes for a more efficient and cleaner hydrocarbon fuels as impurities such as sulphur in fuels may be converted to pollutants such as sulphur dioxide (SO2), a source contributing to acid rain. The high demand of fossil fuels exacerbates the pressing problem; we are consuming fossil fuels, which take a long time to be created by the mother nature, at an incredible rate, though we are also actively trying to reduce our dependence on them by making use of CO2 as a carbon source.

SONG has developed numerous research projects in the areas of chemistry and catalysis for energy and fuels in the US. Before joining CUHK, he was a Distinguished Professor of Fuel Science, a Professor of Chemical Engineering, and the Director of the Energy Institute at the Pennsylvania State University (Penn State) in the US.

His early research focused on improving the process of coal liquefaction with the development of novel catalyst which converts solid coals to synthetic fuels such as gasoline and jet fuels. The idea of fuel synthesis by making good use of resources available in the nature, such as the atmospheric CO2 and hydrogen extracted from water in the hydrosphere, that he shared in 1995 is no longer a proposition or theory, it has become a significant research direction in today’s green and sustainable chemistry. And his thought of taking from nature and using CO2 for the benefit of nature and the society have been transformed into inventions now being implemented in the industry and scaled up for further applications.

Science for Solving Pressing Problems
Another problem that SONG had to tackle was the greenhouse and toxic gases produced during the combustion of hydrocarbon fuel. Amine scrubbing has been used to separate CO2 and hydrogen sulphide (H2S) from flue gas in the industry, but its limitations reduce the efficiency of the whole process. The treatment is energy-consuming and can cause corrosion of materials because of the liquid amine solution used. With the support of the US Department of Energy (DOE), SONG and his team at Penn State proposed and established the molecular basket sorbents (MBS) since 1999 by combining functional polymers with nano-porous materials that show high capacity for selective capture and separation of CO2 and H2S under a low temperature and energy-saving environment. This ground-breaking approach has not only been demonstrated in the industry, but also attracted scientists from different countries including the US, UK, China, Korea, and Japan to explore possibility for further technology advancement.

If removing H2S from industrial gas is a big headache for green chemists, capturing acid gas from the emission is another. Traditional thermal catalytic sulphur removal processes consume a huge amount of energy, and the limestone wet scrubber produces secondary waste by-product. The gas desulfurizing process, namely the Claus process recovers elemental sulphur from gaseous H2S while the final effluent gas from the process is usually incinerated to oxidize residual sulphur to SO2. Last year, SONG and his team devised an innovative method to reduce SO2 to elemental sulphur by plasma-enhanced catalysis. It is the synergistic effect between the new coupling of metal sulfide catalysts and the nonthermal plasma (NTP) under low temperature and pressure that makes this scientific advance a green and revolutionary alternative to conventional flue gas processing. The research has also offered new insights into alternating the combination of catalysts depending on different kinds of flue gas. 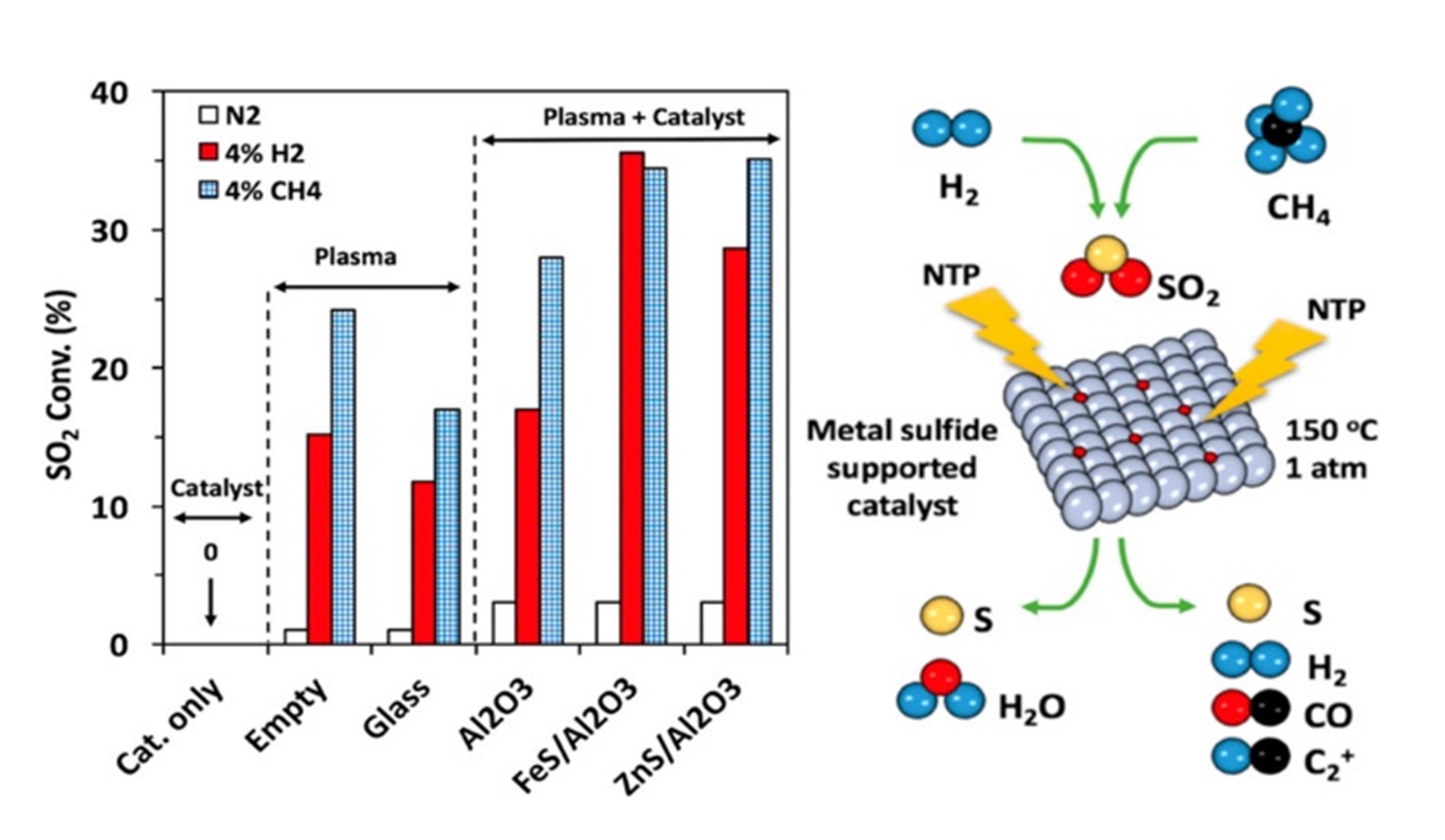 The synergistic effect between the new coupling of metal sulfidecatalysts and the nonthermal plasma (NTP) under low temperature and pressure can directly reduce sulphur dioxide (SO2) to elemental sulphur.
(ACS Catal. 2020, 10, 9, 5272-5277)

The Biggest Motivation Ever
His original and innovative contributions have been widely recognised by many prestigious awards and honours, which include the 2007 Herman Pines Award presented by the Catalysis Club of Chicago of North American Catalysis Society in recognition of his outstanding research in the field of catalysis, and the 2019 George A. Olah Award by the American Chemical Society for his outstanding contributions to addressing several difficult and complex problems in hydrocarbon and petroleum chemistry. Among all the recognition, what surprised him most is the Henry H. Storch Award that he received in 2010.

Established in 1964, the Henry H. Storch Award is a prestigious award recognising researchers who have made distinguished contributions to fundamental or engineering energy related research and development, and education that address the world’s energy and chemical challenges. The award recipients in previous years were all eminent chemists well recognised worldwide. He was overwhelmed when he first learned of the good news. When he recovered from the surprise, he felt truly honoured and privileged to be the youngest and the only Chinese scientist to receive such an important award. The award is so precious to him because he shares the same research interest of chemistry and catalysis in fuel processing with the late Henry H. Storch; it is also a big motivation to him for keeping up the momentum.

Serving Society through Science
To him, serving society through science is equally as important as striking for research excellence to a scientist. He has worked tirelessly to advance energy research and education at Penn State for over 30 years, including 13 years as Director of the Energy Institute, and 5 years as founding Director of University Coalition for Fossil Energy Research (UCFER), and has received many great honours like Distinguished Professor and Faculty Scholar Medal in 2010 and 2011 respectively. His diligent work has advanced the energy-focused research portfolio of the university. Under his leadership, he led the multi-university team to have secured the $20 million USD funding offered by the US DOE’s National Energy Technology Laboratory through a nationwide open competition in the States and established the UCFER. The Coalition, comprising 15 leading universities in the country, works to advance basic and applied research for clean energy through mechanisms that promote collaboration among the DOE and member universities by coordination of research and sharing of data.

He did not choose to continue his tenure and research in the US but has decided to join the CUHK Science Faculty and take on new challenges in advancing science education, research, and service. Upon receiving the invitation for the position of Dean of Science, he was deeply impressed by the great reputation that CUHK has earned internationally in terms of its teaching excellence and research achievements, as well as its unique mission, “to combine tradition with modernity, and to bring together China and the West”. “It’s a great honour for me, a Chinese scholar to serve in my homeland, and to lead CUHK Science Faculty to go global. The Faculty is surrounded with a strong academic atmosphere with world-class researchers. After getting in touch with colleagues from different units, I look forward to exchanging ideas with our prominent scientists and faculty members to explore collaborative research to advance the frontier in energy and fuel research”, said SONG.

Go All Out for Science Education
The pandemic has turned many academic and teaching activities into online one, while the Dean is very keen to meet faculty members and students in person, and interact with them. He especially thanks the former deans for their long-standing commitment to the Faculty, and their contributions to its solid foundation; he is also grateful to the University and everyone in the Faculty for their generous support.

Despite the challenges ahead, he will go all out as what his motto reminds him, “Do the best I can to move things forward and leave no regret”. Looking forward, he is committed to unleashing the potential of the Science Faculty for advancing education, research, and service through promoting interaction between teachers and students, for addressing scientific and societal challenges through interdisciplinary and innovative research, and for building a more diverse and inclusive environment favourable for learning and scientific advance. He also hopes to build more partnership with overseas research institutions and believes that the collaborative teamwork of us will lead the Science Faculty to forge ahead. 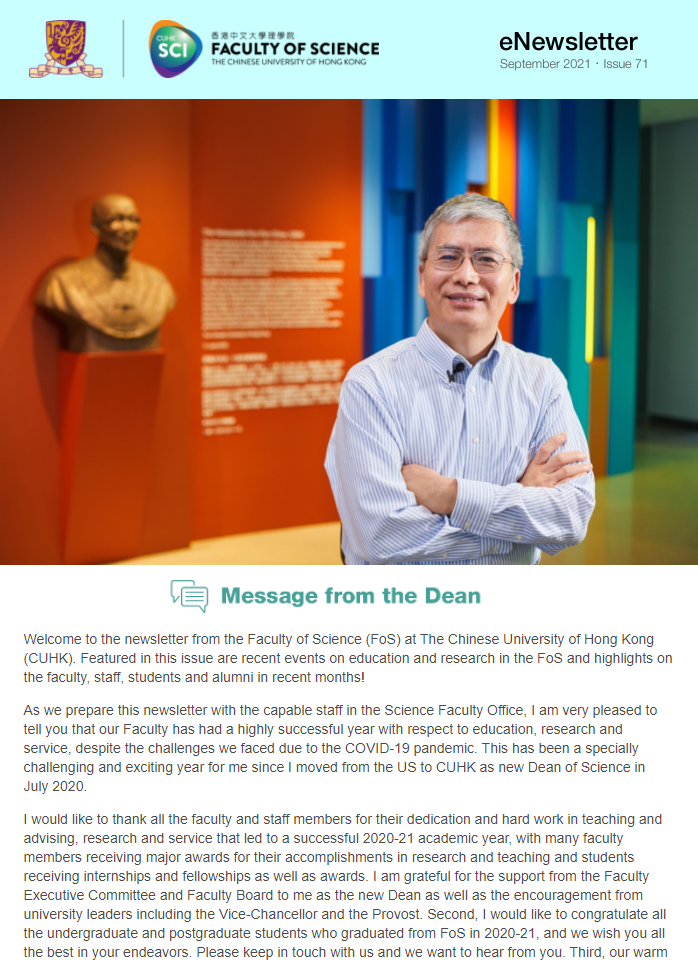